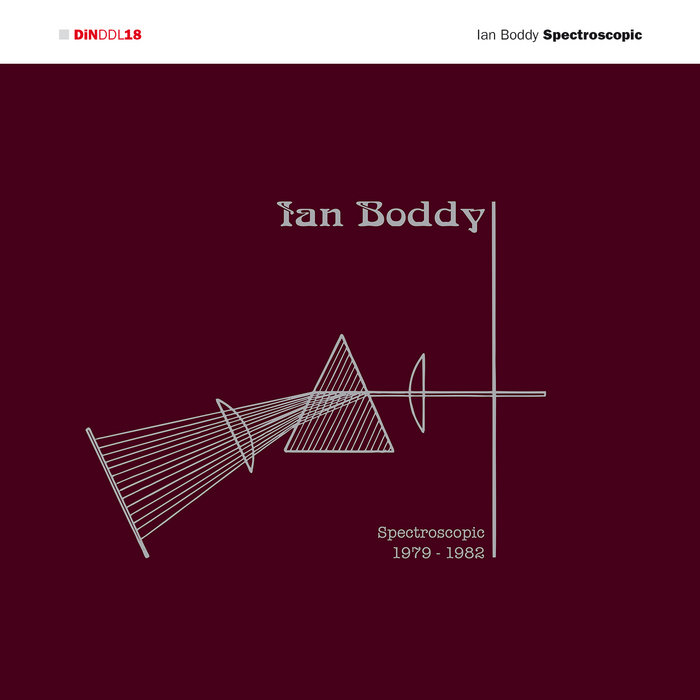 Ian Boddy started his electronic music career at a Newcastle based arts studio in the late 1970's. His early music was released on cassette by the UK label Mirage. Year's out of print and never reissued by Boddy himself these seminal early albums were released in a beautiful 3 LP-Box set by the Vinyl On Demand label in 2013. Four years on and they are now available as a digital download complete with all the artwork from the vinyl package. As well as Images, Elements of Chance & Options the music is bolstered by three unreleased tracks recorded at some of his very early concerts from this same time period of 1979 - 1982.

Here are Boddy's sleeve notes for this historic release:

I’ve been composing, recording, playing and releasing electronic music for over 30 years. Sometimes it feels like I’ve always been doing so. However, this of course is not true and there was a time when oscillators, filters and LFO’s played no part in my life at all. That was except for the music I listened to. I can’t remember the exact date or year but it was certainly sometime in the mid-70’s when I heard two radio broadcasts that I guess, in hindsight, changed my life. One was on the Alan Freeman Show on BBC Radio 1 on a Saturday afternoon and was the track “Mysterious Semblance at the Strand of Nightmares” by Tangerine Dream. The other was at 1.00am on a Sunday morning after a late session listening to the radio show “Bridges”, produced by Jeff Brown and was the last 10 minutes of “Wahnfried” by Klaus Schulze, from his album Timewind. I was blown away. I had heard nothing like these tracks before. I was certainly into instrumental music and had listened to a lot of bands like Camel, Focus and of course Mike Oldfield. But these tracks were different. They literally took you to another world. They were painting pictures in sound.

I had no formal training in music. In fact at school I hated how music was taught and dropped it in my third year at grammar school. I was good at art though and pursued that onto A-level in my spare time. Why in my spare time? Well I was also good at science, especially Biology and all the careers advice I was given was “don’t do art, do science otherwise you’ll never get a job”. So off I went to study Biochemistry at Newcastle University in 1978. I was certainly enjoying this course but in my spare time I wanted to continue with my art. I can’t remember exactly how, but I was told about this publicly funded arts centre in Newcastle called Spectro Arts Workshop, which had screen printing facilities. My artwork was taking a route down a path which had as it’s influences the optical art of Bridget Riley & Victor Vasarely. Screen printing was a good technique to use for such work. I even had some prints exhibited in local galleries.

Now, I don’t believe in fate or any other mystical predeterminism, but certainly chance encounters can lead you down a very different path than what you may otherwise have been pursuing. So one night in the local student union building, having a beer or two with some friends in the student sci-fi society, I overheard someone mention that they had been to Spectro and that there was a sound studio upstairs that had some of the synthesisers used by Tangerine Dream on albums like Phaedra & Rubycon. I almost choked on my beer, as even though I’d been using Spectro for over 6 months, the screen printing studio was on the ground floor and I’d never even ventured upstairs. So, next day off I trooped to Spectro to ascend the stairs and see what awaited me.

At the top of the concrete stairwell lay the big, thick door to the studio. On opening it, what lay before me was a vision of 2 x VCS3 + an EMS (the synths mentioned in the above student conversation) as well as several Revox tape recorders and mixers. Was it a moment of epiphany? Well no, not really, as at that time I really didn’t know what all this gear was, or what it could do. For the next few weeks I played around with this gear and I was shown how to coax sounds out of the VCS-3, which still looks and sounds totally bizarre. An L-shaped wooden box with various knobs and dials, it has a matrix pin patch board used to connect the various components, which has often been likened to the board game Battleships. It was certainly used a lot in early electronic music, especially by the BBC’s Radiophonic Workshop. I still did my screen printing downstairs, but after a few weeks I was getting some really interesting sounds out of this gear and once I was shown how to do tape delay & loops, the penny dropped. I was able to do what I had described above in my description of those electronic music tracks I heard on the radio. I could literally “paint pictures in sound”. At that point I packed my screen printing stuff away and started to play electronic music - I haven’t stopped since.

Of course in those early days, we’re talking 1978 to 80 here, I had no idea what I was really doing. The VCS-3 was notoriously difficult to keep in tune and there was only a 4-track Teac reel to reel tape recorder to assemble tracks on. This was pre-MIDI and computers and everything took ages to do and, was certainly in the analogue domain. Skills such as tape splicing were essential and I gradually experimented and worked out my own solutions for techniques such as tape delay, using 2 Revox recorders placed several feet apart, with the tape running between them. It was only several years later that I spotted a diagram for this on Brian Eno’s album Discreet Music.

After a couple of years of this and nearing the completion of my degree I got an invitation to release an album on the Mirage label run my Martin Reed. I had done a couple of concerts at Spectro. They were quite experimental and I can’t really remember much about them, but I can only assume that word of these had got down to Martin. So I set about composing a suite of tracks for this first album, which was released in 1980 and called simply “Images”. This inaugural release was followed up by a couple of other cassette albums, namely “Elements of Chance” and “Options”. Alongside these releases I continued to do concerts, most of them at Spectro but some others dotted about my native North-East of England.

In 1983 I had two big developments. One was my first release on vinyl, “The Climb”, and the other was my first big concert at the very first UK Electronica Festival down in Milton Keynes. I guess you could say that I served my electronic music apprenticeship at Spectro and that I was now embarking on a musical career. However of course things aren’t as simple as that. Electronic Music has always been fairly niche and so whatever “musical career” I aspired to at that time had to run alongside “real jobs” that paid the bills and gave me some spare cash to invest in new musical instruments. Fast forward 20 years and after slowly but surely musically doing whatever it was I was doing, an opportunity finally arrived where I was comfortable in taking the plunge to become a full time professional composer. And that’s where I’ve been for the last 10 years spending my time writing library music tracks, doing sound design and running my DiN ambient label. Those early cassette albums have become a long distant memory. They were sitting in my vaults and I had no intention of revisiting them. That was until Frank from VoD contacted me with the idea for this box set. At first I thought he was joking but after several E-mails I realised he wasn’t. Fortunately I had archived them off to CDr several years before and set about listening to them. The memories came flooding back and very happy ones they were too. There was a wonderful innocence and naivety to them, but also I was pleasantly surprised to hear a lot of good musical ideas, even though I may not have had the technique or equipment to quite realise what I had intended at the time. I also searched through my archive and found several tracks from some of those early Spectro concerts, which are included here as bonus tracks.

Whether this collection of music is a significant phase in the history of British electronic music is for others to judge. For me though, it is part of my soul, part of my life’s story and one that has brought me immense personal satisfaction.