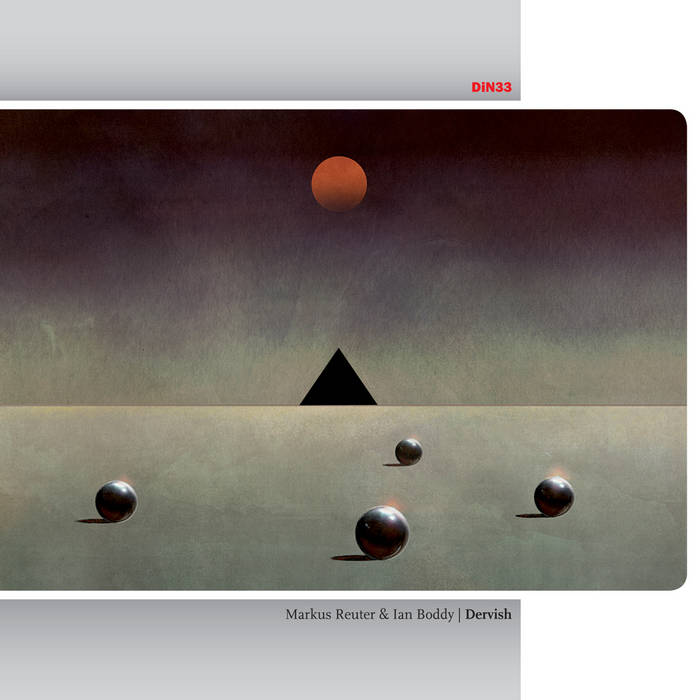 rikm An appealing blend of organic and electronic elements, paired together in a playful and engaging way...

Having first worked together on the enigmatic ambience of Distant Rituals (1999) and the melodic complexities of Pure (2003), Dervish is Markus Reuter & Ian Boddy's most challenging studio collaboration to date.

Recorded in England and Austria, the album contains a guest appearance by King Crimson's drumming and electronics wizard, Pat Mastelotto.
Inspired in part by the musical theories of 20th Century composer Olivier Messiaen, there's a terse angularity to the compositions whose unexpected textures feature the appearances of a string quartet and a recorder player. At a personal level, the music of Dervish and the creative methods used in its composition, have pushed both Boddy and Reuter into markedly different places, forcing each one to change their usual approaches. At a 2008 recording session in Austria, having sampled Reuter's Touch Guitar loops, Boddy then effectively "plays" the notes. The result is a mirage of shades and colors in which it is impossible to determine the respective roles of the players. At times Dervish occasionally flirts with playful but punchy dance beats, off-kilter funk and stabbing percussive blasts that manage to be both unsettling in their apparently anarchic deployment whilst also providing a startling focal point. Their microscopic attention to the album's sound design ensures every track sparkles with intriguing detail that include the spiraling patterns of the Hang (a hybrid steel drum). Enthusiasts of vintage electronic instruments will also appreciate Boddy's recreation of the theremin-like Ondes Martenot via a modern keyboard equivalent and his modular synthesizer by way of an oblique tribute to Messiaen who famously included it's eerie tones in his Turangalia Symphony.
Dervish's sound-world is constantly evolving and always in motion. Atmospheric loops, cross-picking arpeggios, unresolved sequences that hang in the air, and some metallic-edged soloing that carves its own unique space. All add extra layers of momentum and tension to a music already brimming with invention and mystery. The muscular dynamics on this recording were achieved by acclaimed engineer Clemens Schleiwies, who translated the digital recordings back onto analogue tape. These were then run through a vintage sound desk that was used by the likes of David Bowie and Brian Eno during their legendary sessions in Hansa Studios, Berlin. This "new meets old" approach with its combination of 20th Century post-production techniques and up to date tech-savvy gives Dervish some of its a freshness and undeniable presence. Across its seven tracks, Dervish pushes way beyond the usual comfort zones of electronic and ambient music. You may have heard Boddy and Reuter before but you've not heard them sound like this.