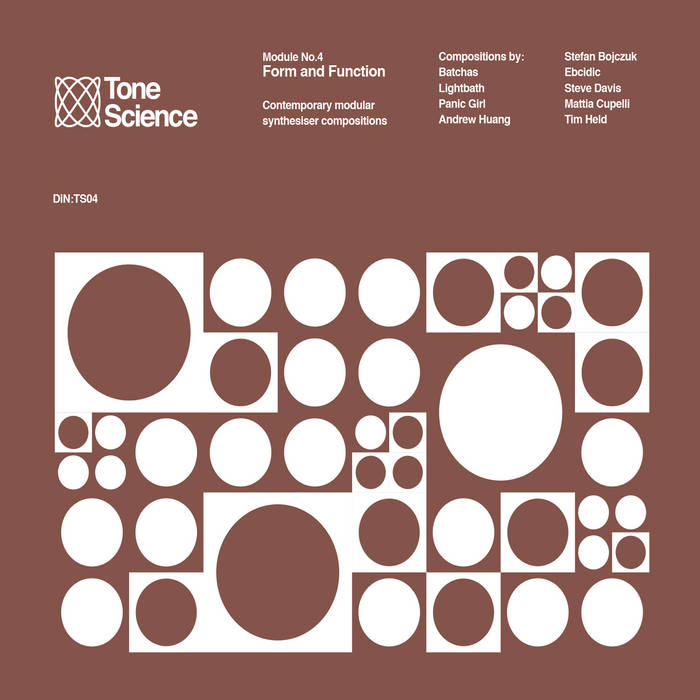 Following the success and critical acclaim of the first three Tone Science compilation albums, DiN label boss Ian Boddy has collated another nine tracks from musicians of varying backgrounds working in the realms of modular synthesis.

One of the challenges for Boddy in compiling the Tone Science albums is to get the track order flowing to reveal a musical structure. There’s a certain amount of serendipity in this but for Tone Science V4 the shape of the album became very obvious early on. Opening with the beautiful abstract forms created on a vintage Paperface Serge system by Batchas the next two tracks feature gentle shimmering & undulating sequencer patterns from Lightbath & Panic Girl that instil a sense of calm & wonder.

This leads us to the middle section of the album where first Andrew Huang gently slows down proceedings with harmonic abstract patterns before Stefan Bojczuk twists the mood with a stark, moody atmosphere conjuring up images of the isolated landscape referenced in the title of his track, Blackstone Edge.

Things start to climb up to the sonic climax of the album with first Ebcidic providing a dark & dangerous pulsing sequence followed by a crazy psychedelic melange of a track from the inimitable Steve Davis. This is followed by a sledge hammer of audio from Mattia Cupelli with huge gnarly bass & TNT percussion from which there seems to be no escape.

After such an astonishing climax the longest track on the album by Tim Held at first appears to mirror the distorted tones of the previous track before a sense of calm ensues and the album finishes with a final long, beautiful breath.

“Tone Science Module No.4 Form and Function” continues the journey down the rabbit hole of possibilities and sound worlds inhabited by artists and musicians working in this ever fascinating and varied musical field.

Batchas Setting Sun 7:42
Inspired by the nature around me where I live now, I enjoy short evening meditative sessions on the modular. This piece is an improvisation made on a Serge Paperface system from 1978.
batchas.com

3. Panic Girl Dream Portal 5:20
What if you could switch from one persons dream to another in the blink of an eye? Like switching radio stations or entering a portal? Panic Girls music opens up imaginary mindscapes through the use of field recordings, catchy melodies & experimental soundscapes.
panic-girl.com

4. Andrew Huang Astral Plane 5:16
An exploration of a pitch sequence with occasional randomisation from Usta, voiced by Falistri through Magneto with numerous delay parameters played by hand. A simple bass voice is provided by layering tones from a Waverazor & Lifeforms SV-1.
youtube.com/andrewhuang

7. Steve Davis Elements of Medical 7:42
Repetitive psychedelic loops are fascinating me more than ever. Currently channeling these through the Magneto and Panharmonium but then I haven’t plugged in my Morphagene yet!
theutopiastrong.bandcamp.com

8. Mattia Cupelli ex Machina 7:44
These dwell among the blackest souls, loaded down deep by sins of different types. If you sink far enough, you’ll see them all.
mattiacupelli.com

9. Tim Held Myrdet av Gud 9:14
Journey from loathsome suffering to acceptance. Life can make you work for personal growth. Its painful upsets are legion. We experience many death and rebirths. This piece portrays this process.
podularmodcast.fireside.fm