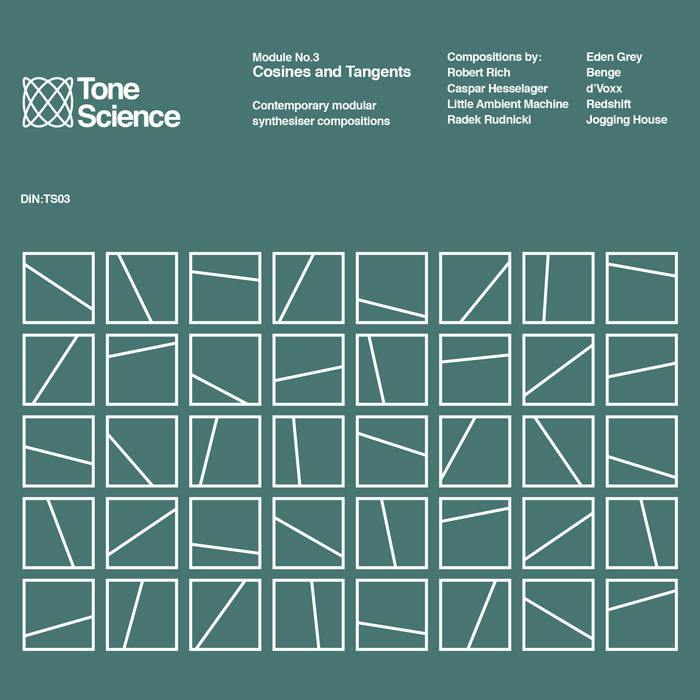 Martin Doudoroff I’ve greatly enjoyed all three releases in this series, but this one goes straight for my throbbing Berlin-school soul. Favorite track: Berserker.

Mike Shockley So much to like here - the textures and details, not to mention that it's, dare I say, downright catchy! Favorite track: The Divided Apparatus.

smokyfrog The series just gets better and better. An awesome achievement! Favorite track: The Divided Apparatus.

Julius Terrell This series keeps on captivating me. Music like this is so hard to come by and it is exactly what music means to me. A scientific expression of tonal complexity. I highly recommend this series to everyone! Favorite track: The Divided Apparatus.

Following the success and critical acclaim of the first two Tone Science compilation albums, DiN label boss Ian Boddy has collated another nine tracks from musicians of varying backgrounds working in the realms of modular synthesis.

Three of these names will be familiar to DiN listeners whereas the other six are new to the label.
Thus the album opens with a shimmering soundscape from American ambient pioneer Robert Rich who has previously collaborated with Boddy on three DiN releases. Well known for his infamous “sleep concerts” Rich here focuses in on the sonic details that modular synthesisers can offer the composer. The following two tracks by Caspar Hesselager and Little Ambient Machine show beautifully how a simple melodic sequenced phrase can be shifted, fractured and refocused in the analogue domain.

The mid album section then features two very different tracks with a more experimental feel. Radek Rudnicki cleverly mixes samples of traditional Japanese music controlled in the modular world with great swathes of analogue synth whereas Eden Grey uses her modular in a very retro, radiophonic manner to conjure up the raw sounds of yesteryear.

The music returns to sequenced tracks with synth maestro Benge lightening the mood with the Kraftwerk like motifs of “Round #2”. The next track, “Angel”, is by d’Voxx who recently had their debut album, “Télégraphe” (DiN58) released on the DiN label to great acclaim. Once again they show off their skilful use of sequences with melodic progressions to create a captivating track. The album has it’s sonic climax with “Berserker” by Redshift which after a dark sonic intro section goes into overdrive with a huge Moog modular system going full tilt. Redshift is none other than Mark Shreeve who has been a long time collaborator with Boddy in the ARC project which has spawned several releases on the DiN label.

Finally after such a huge sounding piece the album calmly dissipates through the beautifully simplistic yet haunting “Hands” by Jogging House to bring to a close another varied and intriguing Tone Science album.

“Tone Science Module No.3 Cosines and Tangents” continues the journey down the rabbit hole of possibilities and sound worlds inhabited by artists and musicians working in this ever fascinating and varied musical field.

2. Caspar Hesselager The Divided Apparatus 8:51
Made on a Make Noise Shared System, patched and recorded within a few hours to one stereo track. A simple pattern is developed in different ways in terms of accents and timbre.
youtube.com/c/CasparHesselager

3. Little Ambient Machine Anemones 9:02
Anemones is a ‘more or less’ generative patch using only 3 sound sources and fx. The heart of this patch is Chance in conjunction with an O&C quantizer, providing random triggers and pitch.
littleambientmachine.com

5. Eden Grey AVA 2 7:27
A sonic meditation composed with my custom Eurorack modular synthesizer, focusing on the slow rhythmic dispersion of sounds combined with a drone vibe.  I am concentrating on the tones created with subtle movements & the silences between them.
edengrey.bandcamp.com

6. Benge Round #2 6:02
Having set up a tone-sequence on ARP2500 I then processed some percussive loops on MODCAN-A, making use of the CV-Recorder, which can be used as a crude audio sampler.
myblogitsfullofstars.blogspot.com

7. d’Voxx Angel 5:34
Angel, a performance composition for new modular instrument. Centred upon both analogue & digital voices, modulation and sequenced under control voltage, it invokes a transient spirit trapped in the twilight.
dvoxx.com

8. Redshift Berserker 7:48
Music for me is about one thing and one thing only, emotion. Without that everything else is irrelevant.
redshift2.bandcamp.com

9. Jogging House Hands 6:30
Hands is about the sensation you feel, when the touch of a loved one pulls you out of your daydreams and back to reality - just to drift off again afterwards.
jogginghouse.com