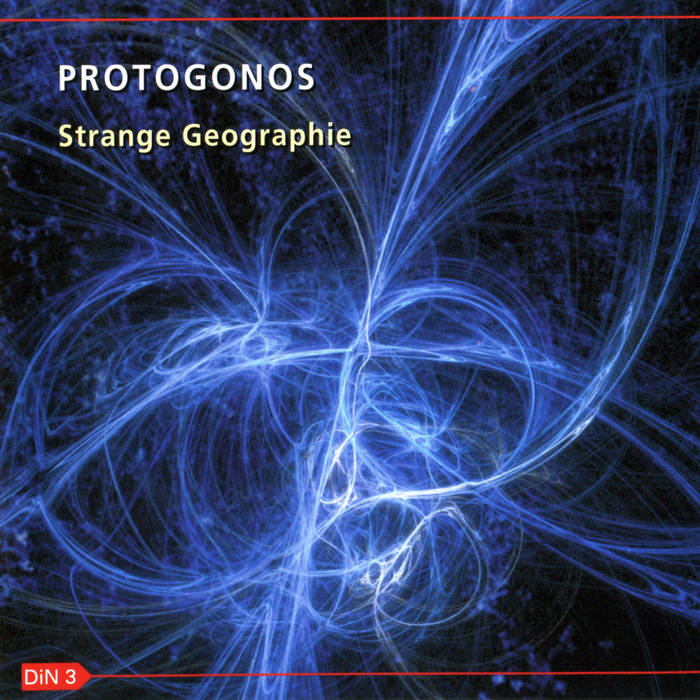 
This is the first release from this duo of space pilots based in Halifax, UK. If 16th Century renaissance man Francis Bacon was alive today, this is what he'd be playing. An alchemical blend of amorphous and swirling textures, this is music from the sound houses where the maps don't go.

The first four minutes of the title track tease the listener into thinking they are about to receive a grandiose space epic. You know the kind of thing. Big chords glacially suspended, a simple descending melody evoking musical memories from some of the more well known Teutonic knob twiddlers. The tension builds and one can almost sense the sequencers and drum patches itching to burst into life.

However, the expected musical formula that one can associate with much electronic music doesn't come and the whole show stops in its tracks. At this point Protogonos take a left turn and avoid the obvious. The implied resolution doesn't come and the feast of expectant cliche is shunned and ignored.

As the ornamentation drips away and the luxuriant strings peel off into a dark underworld, the sounds become akin to the experience of searching a room in the dark. Everyday familiar objects become changed and transmuted. What was once friendly now appears menacing. The effective mood is dark and the usual indicators and reference points are either removed or have become unreliable. With its lack of drums or conventional sequencing, you might imagine that this is a tranquil, placid affair. Instead what we hear is a chaotic whirlwind of a voyage, at times jarring, mysterious and dissonant.

Lixivium extends and develops the motif of the dark and foreboding rites of passage. At around the 5.00 minute mark , the disembodied voice of what might be the tour guide echoes back and forth, the indecipherable words only adding to the sense of dislocation. Scraps of melody surface occasionally amidst the ebb and flow of analogue washes, twittering and scrapings. Nothing stands still or stays the same for long. Only after 12 minutes does the changing pace let up. For me, the following five minutes are some of the most beautiful points on the album. A slow, glowing pulse shimmers in the cavernous calm, the lo-fi crackle and cacophony abandoned albeit momentarily. The result is a moment of alchemical calm where base metal is triumphantly transmuted to radiant gold.

Amaranthine, the final track beeps into life. These bubbles and chirrupings might double up for a 1950s sci-fi soundtrack or an homage to the work of the musique concrete pioneers of that era. At 6.00 minutes or so, we hear the first major drone on string synth since the album began. Once again Protogonos eschew the obvious. This mighty chord is slowly wreathed in sine waves, much like an ancient tree covered in ivy, its shape subtly changed . Tendrils of sine waves and insidious white noise snake and squeeze their way around the body of this piece. The rate of change is temporarily halted to allow a ponderous sequence of chords to evolve. 15 minutes into the music we are off again. The mighty chords slip and slur downward, huge slashes of white noise cut a swath through the increasingly dense undergrowth. Ominous clouds throbbing with menace, rumble overhead. At nearly 30 minutes, Amaranthine is a study in concentration and assemblage.

Without a series of bright tunes or sparkling synth solos of baroque virtuosity, this can be an uncompromising collection. Dense and unforgiving, Strange Geographie is not for the casual traveller or day tripper.

Anyone expecting a clean digitally brightened landscape should proceed with caution. For me, that's perhaps this albums chief appeal. It has grit and buzz with a cut and paste edge that makes it sound graphically organic.