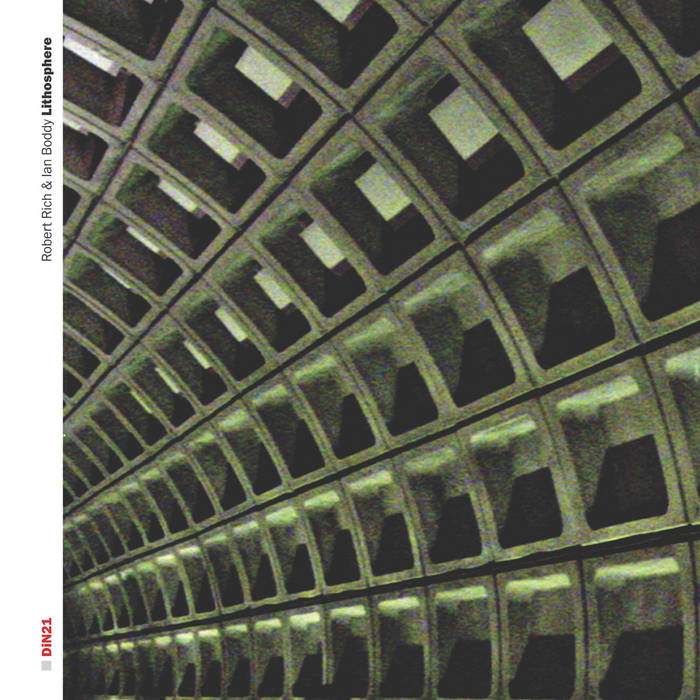 "Lithosphere" is the second collaborative release between DiN label boss Ian Boddy & American ambient pioneer Robert Rich. Following on from their debut album "Outpost" (DiN 11 - 2002) the duo once again decided to eschew the false economy of a purely virtual collaboration and convened at Rich's Californian Soundscape studio to physically work together over an intense period of 10 days.

Following Boddy's departure Rich then honed and fine-tuned the arrangements before finalising the mastering of the project.

Whereas "Outpost" was sonically 'out there' and was perceived by many to have it's heart in the realms of space music, "Lithosphere" has a more earthy, organic quality. Once again the album is centered around Rich's signature lap steel guitar voicings and deep bass machinations of his analogue MOTM modular system. However Boddy's input is once again unexpected in it's direction with astonishing sound design elements intermingling with delicate keyboard textures using high quality sampled glass & stone percussion instruments together with haunting string & woodwind loops.

One of the binding forces for this album was the duos decision to utilise an alternate just intonation tuning. This at times gives the harmonies a piquant flavour whereas at others a glistening quality that just adds to the sonic exotica that Boddy & Rich have concocted on "Lithosphere".

Boddy has always pushed the aspect of collaborations within his DiN catalogue and "Lithosphere" shows the true advantage such a philosophy brings to bear musically on the labels output. The album is a true reflection of the two artists combined efforts and could only have been produced with their joint work ethic. "Outpost" is one of the most popular DiN albums. There's every chance that "Lithosphere" could surpass the high standard that it's illustrious predecessor has set.