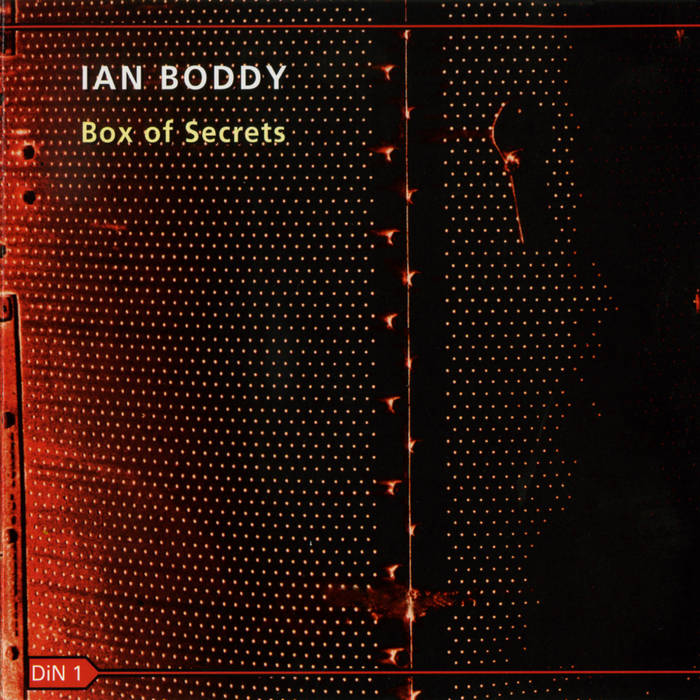 Robert Wallace Layer upon layer of goodies to be found here. This is how to make 'interesting' sound interesting and not boring. Mr Boddy has come up with the goods again and anyone who likes it electronic then this is a Christmas present not to miss out on. Favorite track: Hive Culture.


Swirling arabesques of analogue synth, fractured rhythms and dense clouds of texture and grain make this, the 11th solo release by ace synthesist and sampler maestro, Ian Boddy, his most important to date.

A Listeners Guide To Box of Secrets:

Over 11 solo albums, Ian Boddy has sought to raise the standards and levels of his playing, composition and production. Rather than be a prisoner of his own success and the potential prisoner of fan expectation, Boddy has once again opted to accept the challenge of producing investigative electronic music that traverses the many styles contained within that genre.

That may not be too contentious especially if one looks at the differing worlds of previous Boddy efforts such as Continuum and Octane (co-produced with Mark Shreeve and released under the name of Arc). What gives Box Of Secrets it's slightly controversial edge is the way Boddy has met the challenge posed by the impinging world of emergent dance culture.

There might be some more traditional schools of thought which regard such a cross-over as heresy. There are other strands of thought which take a more pragmatic view of things and argue that any musical style or genre are open to interpretation. Lets be clear, Box Of Secrets is not by any stretch of the imagination a dance album. However, there are tracks which would not be out of place on the floors and chill out rooms of some of the more progressive establishments in the dance world.

Boddy is no stranger to the world of dance beats and the albums opening track, Frozen Web, contains almost 6.00 minutes of sibilant flirtation with club rhythms over a pulsing, swirling back drop of sequencers and atmospherics. With a hip hop, skip and jump, this emerges into a thumping groove which climaxes with a straight ahead soaring solo.

The title track Box Of Secrets opens with an ambiguous, ominous hum. It could be distant machinery or the sound of something alive standing closer than you'd like. In the end, the sound morphs into a muffled heartbeat, shrouded in the sound of delicate wind chimes. A moderately paced shuffle sets the scene for an almost elegiac piano solo. Distant heavenly choirs enter at around the five minute point which only adds to the solemnity of the proceedings. For established listeners, this track will bring a warm glow of familiarity. For newcomers, you'll find out in a nutshell what all the fuss has been about.

Shadows In The Sand opens with what sounds like bowed metal echoing in some cavernous Eastern market place. There is a depth and colour to this section which makes for very satisfying listening. It is evident that Boddy has put a lot of care and attention into creating these little vignettes. It would be a mistake to regard such sections as fillers or spacey froth. They are part and parcel of the overall track and are just as important to the tracks as any of the rhythm sections or solos. Over a medium paced and somewhat funky and heavily filtered drum track, the piece evolves into an expert piece of ethno-forgery, as Boddy reconstructs his version of what a zither and a Duduk might sound like. Listen out in particular for the superb soloing on this track. As a veteran Boddy-watcher I rate this as amongst the best that he's committed to disc to date. Theres a looser, languid feel to the playing which somehow makes it freer.
There's even a certain humour and piquancy to the solo as it weaves and dives around the speeding beats. Whilst the choir and sequencers will provide a reference point for the traditional listener, there's much on this track that is new and thus will stand repeated listening.

Theres Something In Your Attic is a tone poem of impressive structure and brevity. In just under three minutes, Boddy offers up a description of a terrifying interior in which paranoia and self doubt are the principal landmarks. The assembled sounds and collages are not laboured or overdrawn. It's a testimony to Boddys judgement that he avoids any unnecessary melodrama in describing those dark terrors that can lurk upstairs.

Thankfully, the gloom laden rumination is mercifully short and gives way to Walking The Slow Path. With what might be a wry nod of acknowledgement to his Tuetonic influences, the piece opens with the luxuriant patina of grainy synth. You can almost feel the texture as these glorious sounds ooze from the speakers. The instrumental palette is further extended and enhanced with a sublime, descending phrase from flutes. Theres a slow, mutant funk which permeates this track which makes it irresistible. With the playful addition of a scratched record fx, layers and textures are built and added over the course of 13 minutes which makes this the longest track on the album. The orchestration is almost terse and certainly devoid of any superfluous flourishes which could have easily marred what may well turn out to be one of the most well regarded tracks in his recording career. On Walking The Slow Path, Boddy effortlessly encompasses most of whats happening in electronic music today. Be it industrial, dark ambient, chill out or cosmiche, you'll find it all in the Boddy blend, brewed to perfection.

Nobodys Home suggests the sound of a deserted steel yard, the shards of sparking metal burning into the night. If the previous track is the highlight in traditional compositional terms, then this piece must be in line for an award in pure sound design. Instead of working with string synths, chords and choirs, Boddy is conjuring music out of anything from fax tones, engaged announcements as well as the more obvious sound sources. It's a different compositional style that's being developed here and easily one of his most courageous and exploratory tracks to date. Once again, it would be a mistake to regard this as some kind of filler because it lacks a discernible beat or rhythm. This is wonderful melange of carefully chosen tints and textures, grafted together to make a stunning and original soundscape. Don't expect pretty sine waves and the like. There's a rich darkness to this piece which is compelling.

The album's closing track Hive Culture reminds one of a speeded up film of city life. Everything rushing to get from one place to another, screeching brakes, low flying planes and the rush of air as trains clatter toward commuter laden platforms. A fast, insistent beat drives the track relentlessly onwards. Overall, Hive Culture is a tour de force which demonstrates why Boddy's work is well respected by musicians as well as ordinary fans. His grasp of tightly scripted solos and striking arrangements make for dramatic listening full of thrills and spills.

On Box Of Secrets, Boddy has an economy in his musical language in which the unnecessary has been paired back or discarded. For me, there's a greater maturity in both the playing and compositions which have enabled Ian to make bold choices and not only what is possible but what is desirable. Boddy's well defined love of melody is still very much in evidence on this, the first release on DiN, which is bound to please the long term supporters of Ian's music. However, there is much that is new and challenging which will ask the listener to suspend their usual definitions of what constitutes electronic music.

Without doubt, the album does mark a departure for Ian in that there's an emerging concern around the deployment of pure sound and texture as composition as opposed to gimmick or effect. As in other recent work (such as Distant Rituals with Markus Reuter - DiN 2 ) there's a refinement to his compositional process and choices which make Ian Boddy the one to watch. Mark my words, this is a landmark album with musical quality as the principle concern. Get in on the ground floor and impress your pals.